I am delighted that my book cover for Harold Wilson, Denmark and the Making of Labour European Policy, 1958–72 (Liverpool: Liverpool University Press, 2017) is taking shape. The book will be available for pre-order from March this year.

My piece for Eurooppatiedotus, European Information run by the Finnish Ministry for Foreign Affairs, was published recently. You can find the published piece here. The English language version is below.

Who is eligible to vote in the referendum has been a subject of much debate in Britain. It is complicated by British history and the significance the government still gives to the successor states of the former British Empire, the Commonwealth.

The simple answer is that all British and Commonwealth citizens aged over 18 and living in the United Kingdom can vote. British troops stationed abroad can also cast a ballot, as can those citizens who no longer live in the country but have been on the list of voters – the electoral register – in the last 15 years. Unlike in general elections, Commonwealth citizens living in Gibraltar are also eligible.

Controversially, EU citizens who live in Britain are not allowed to cast a vote, despite many paying taxes and contributing much to Britain’s communities and way of life. There are, however exceptions: people from Ireland, Malta and Cyprus will each be allowed to vote because of the historical links between Britain and these countries.

Many people, including the leadership of the Labour party, had hoped to extend the vote to include 16 and 17 year olds. They used the decision by the Scottish Government to offer the vote to this age group in the Scottish independence referendum in September 2014 to justify their argument. However, government ministers blocked the plan, saying that 16 year olds were too young to make a decision of such national importance.

What will people be voting for?

People will be asked to decide whether to remain in the EU based on the reforms that Prime Minister David Cameron secured at a meeting of the European Council in February. If people vote to remain in the EU, these changes will become law immediately. They include:

Sovereignty: For the first time, and unlike every other EU member, Britain will not have to take part in ‘ever closer union’ with other EU states.

Eurozone: Britain will definitely not join the euro, and will not be penalised for doing so. Britain will also no longer have to bail out eurozone countries that come into economic difficulty.

Welfare: The most controversial change. Child benefit paid to EU workers will be paid at the rate of their home country. This will mean citizens from Poland and Romania will get paid less. People who marry EU citizens will also not be given an automatic right to stay in the EU. This affects every EU country, not just Britain.

Competitiveness: The Commission and European Parliament will be compelled to make better regulation, so that businesses and industry throughout the EU can remain competitive – something likely to increase growth throughout the Union. The City of London will also have specific safeguards to prevent it having to comply with eurozone regulations such as a tax on transactions.

Who will lead the campaigns?

The Electoral Commission will select an official ‘remain’ and ‘leave’ campaign group, and this decision will be announced on 14 April.

The two official campaigns will each be given £600,000 (€768,000) of public money to spend on administration, TV and internet ads, and public communication. They will also be able to accept private donations from other individuals eligible to vote in the referendum, or a UK-based company, charity, trade union or bank. Other groups, such as UK universities and trusts, can also donate. To ensure transparency, the source of donations over £10,000 (€12,800) has to be made publicly available. There is an overall spending cap of £7 million (€8.9 million), regardless of how much the campaigns receive in private donations.

Other, unofficial groups can also spend money on the campaign if they wish. However, this is also tightly controlled. If these unofficial groups register with the Electoral Commission, they will be able to spend no more than £600,000. Those groups that do no register with the Electoral Commission can also campaign if they choose to, but their finances are even more tightly controlled: they can spend just £10,000.

What about the political parties?

All national and regional parties are officially in favour of remaining in the EU, even if many of their own members are not. How much each party spends of its own money is again very tightly limited, and is based on their share of the national vote in the 2015 general election. This means that the Conservatives have the most to spend – £7 million – while smaller parties such as the SNP, Liberal Democrats, the Green party, and UKIP have between £4-5 million (€5.1-6.4 million).

What groups are there?

At the moment various groups exist. On the ‘remain’ side is Britain Stronger in Europe, a cross-party group that consists of businesses, individuals such as billionaire Richard Branson, television personalities, trade unions and politicians. David Cameron himself will not join this group but will campaign for Britain to remain as the prime minister.

The ‘leave’ side is more fractured. Vote Leave is very well funded and counts prominent politicians such as London Mayor Boris Johnson among its members. Grassroots Out is another group, comprising UKIP leader Nigel Farage and other politicians from Labour and the Conservatives. A third group, Leave.EU, has since merged with Grassroots Out. A final group, Business for Britain, has close connections with Vote Leave.

Some parties also have their own campaign groups. The Labour in for Britain group is a specifically Labour-group run by the former interior minister, Alan Johnson. However, some left wing Labour MPs instead support Another Europe is Possible, which emphasises the social benefits of remaining in the EU. Anti-EU groups include Conservatives for Britain and Labour Leave. None of these groups are likely to have access to party funding, but they do indicate how divided the Conservatives and Labour – by far the two largest parties in Britain – both are.

The debate so far

Many of those opposed to the EU are concerned about sovereignty and the freedom of the British Parliament to make policy unhindered by Brussels. They also cite concerns about freedom of movement, immigration and control of Britain’s borders as reasons why Britain should leave. Some prefer free trade organisations, such as the European Free Trade Association (EFTA), to the EU. Countries like Norway and Switzerland are often held up as example of what Britain could be: close to the EU, but not a member of it.

Those who wish to stay say that Britain is better off in a large market of 500 million people. They point to the fact that half of Britain’s trade is with the EU, which they say would be hindered should Britain decide to leave. They also say that Britain is safer in the EU. For instance, they point to how the EU is able to stand up to Russia and negotiate with Iran about nuclear disarmament. Others say that Britain’s influence in the world – and in particular its standing in Washington – would diminish should it decide to leave.

At the moment, the polls are very close. People trust David Cameron more than most other politicians; they are therefore likely to accept his arguments. The intervention of President Obama in the campaign, saying that the United States wants Britain to stay, may also prove crucial. But lots can and will happen between now and 23 June. The next update in this series, which will cover the media portrayal and the decision by the Electoral Commission to designate official campaign groups, will include that latest developments. Be sure to check back. 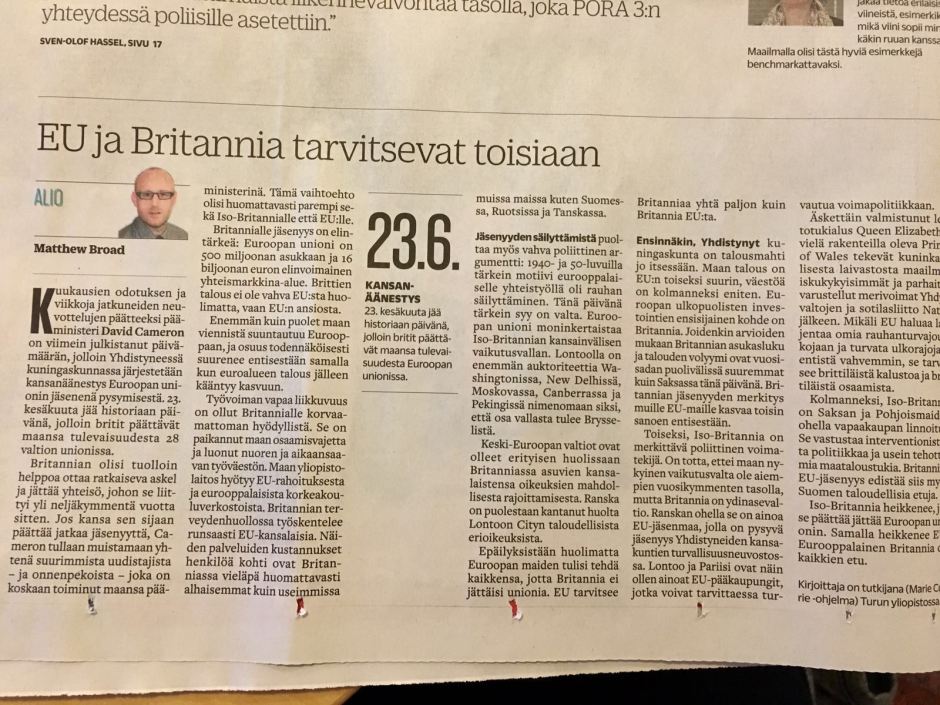 This was originally published in Turku Sanomat on 25 February 2016. The English language version is below.

After months of waiting and weeks of negotiations, prime minister David Cameron has finally announced the date of the referendum on Britain’s continued membership of the European Union.

On 23 June the British people will decide the fate of the UK’s relationship with the 28-member bloc. Britain could very easily take a decisive step towards leaving a group that it joined over forty years ago.

Alternatively, if people choose to stay, Cameron will go down as one of the most transformative — not to say lucky — prime ministers Britain has ever had. And both Britain and the EU will be much better off.

It is vital for Britain to remain. The EU is a large and vibrant single market of 500 million people worth $16.6 trillion. Britain has a strong economy because of, not despite, this. Over half of Britain’s total exports are sent to other European countries, and this will likely only increase as euro members return to growth.

Membership also represents a huge opportunity for the UK to secure investment, with many companies choosing to base their European headquarters in Britain. Free movement has been incredibly beneficial to the UK, plugging skill gaps and creating a young, vibrant work force. Its university system benefits from EU funding and Europe-wide higher education networks. Its healthcare system is staffed by a huge number of EU citizens.

And for all this the UK pays far less per person than most other countries, including Finland, Sweden and Denmark.

There is also a strong political argument in favour of staying. In the 1940s and 1950s the main reason for European states to cooperate was for peace. Today it is for power.

The EU multiplies Britain’s influence in the world. London has more authority in Washington, New Delhi, Moscow, Canberra and Beijing precisely because it is part of the apparatus in Brussels.

Persuading other EU states to support the renegotiations has not been easy. Central European states are especially worried that their citizens resident in Britain will have their benefits restricted. France is also worried about special protections for the City of London that will not cover its own financial sector.

But these countries should do all they can to help keep Britain in. For the EU needs Britain as much as Britain needs the EU.

First, the UK is a large economic power in its own right. It has the EU’s second largest economy, its third largest population, and it is the first destination for most global investment in Europe.

According to some, by the middle of the century Britain will have a larger population and economy than Germany does today. British membership will therefore only become more important to other EU members.

Second, the UK is a huge political power. Admittedly it does not have the same weight it has had previously. But the UK is a nuclear armed state. Together with France it is Europe’s only permanent member of the UN’s Security Council. This means that, besides Paris, London is the only other capital that is able to project its power by force.

The building of two new aircraft carriers — HMS Queen Elizabeth and HMS Prince of Wales — will make the Royal Navy the most feared and well equipped sea force in the EU, and second only to the United States in NATO. If the EU wants to extend its own peacekeeping force and secure its own external borders, it needs British equipment and British knowhow.

Third, Britain, along with Germany and the Nordic states, is a bastion of free trade. It helps guard against interventionist politics and often wasteful agricultural subsidies. Finland is better off financially in the EU because Britain is also a member.

Britain will be worse off it does not decide to stay in June. But so will the EU. It is therefore in everybody’s interest that it stays.